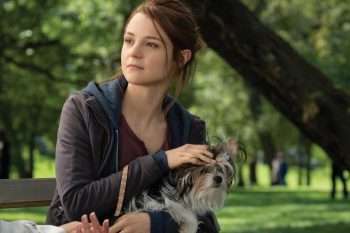 British actress Kathryn Prescott (The Son, Skins) stars in A Dog’s Journey as CJ, a young woman who has her share of personal crisis (including an estrangement from her mother Gloria). CJ is the granddaughter of Ethan (Dennis Quaid), and Josh Gad returns as the voice of Bailey (and all the other canine reincarnations).

“I think the thing that really made me want to do this film was that it was sort of that classic idea of a human and their dog and them helping each other,” said Prescott. “But it was centered around a woman’s relationship which I haven’t really seen before. I know a lot of women who have dogs and I thought that was a really nice take, and I was surprised that it hadn’t been done before.”

Click on the media bar to hear Kathryn Prescott discuss what she learned about canines while shooting A Dog’s Journey.

A Dog’s Journey, directed by Gail Mancuso, opens nationwide May 17.