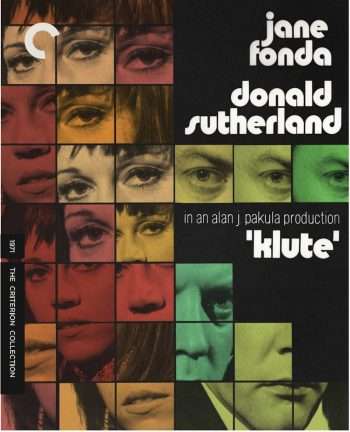 Klute, a thriller directed by Alan Pakula (All The President’s Men) which featured an Oscar winning performance from Jane Fonda, hits Blu-ray and DVD July 16 via The Criterion Collection.

The narrative centers on John Klute (Donald Sutherland), a detective who is searching for a missing man. Fonda plays Bree Daniels, an escort who becomes a focal point of Klute’s investigation. Revered cinematographer Gordon Willis (The Godfather) lensed the 1971 feature.

Special features include a conversation between Fonda and Illeana Douglas, a documentary about the making of Klute, an interview with writer Amy Fine Collins, archival interviews with Fonda and Pakula, the short documentary “Klute in New York” and an essay by critic Mark Harris.

Are you a fan of Klute and do you think it’s one of Fonda’s finest roles? Feel free to comment below!