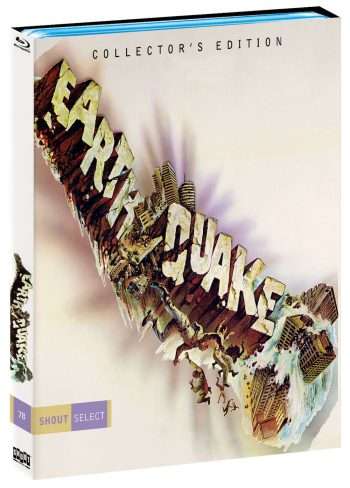 Earthquake, the disaster epic headlined by Charlton Heston, will be released on Blu-ray May 21 via Shout! Factory. The theatrical cut and TV version have both undergone a new 2K scan, and the two-disc Collector’s Edition comes with a plethora of new features.

As a catastrophic earthquake hits Southern California, strangers must band together to ensure their safety before the next aftershock wreaks havoc in the area. The all-star cast includes Ava Gardner, George Kennedy, Victoria Principal, Lorne Greene, Geneviève Bujold and Richard Roundtree.

New features include three featurettes (“Painting Disaster: The Matte Art of Albert Whitlock,” “Scoring Disaster: The Music of Earthquake,” and “Sounds of Disaster: Ben Burtt talks about Sensurround”). Also included in the release are archival audio interviews with Heston, Greene, and Roundtree, along with still galleries and the theatrical trailer.