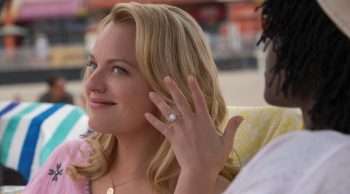 Elisabeth Moss has carved out a successful career in both film and television. On the television side, she’s received critical acclaim for her work on Mad Men, Top of the Lake, and The Handmaid’s Tale. Cinema wise she has a long standing collaboration with director Alex Ross Perry (Her Smell, Listen Up Philip, Queen of Earth) and now she’s part of the ensemble on Jordan Peele’s smash hit Us.

Moss accepted her role in Us sight unseen thanks to her belief in Peele. “I sort of said yes even before looking at anything or reading anything,” said the actress. “I had a meeting with him and he said ‘oh, there’s this part for you and I want you to do it.’ I (said) ‘I don’t want to sound desperate, but yes, that sounds great.’ He said, ‘Well, I’ll send it to you, let me know what you think.’ I was like ‘No, I don’t think you understand, yes it’s fine.”

Click on the media bar to hear Moss discuss the “thoughtful popcorn” aspect of Us: