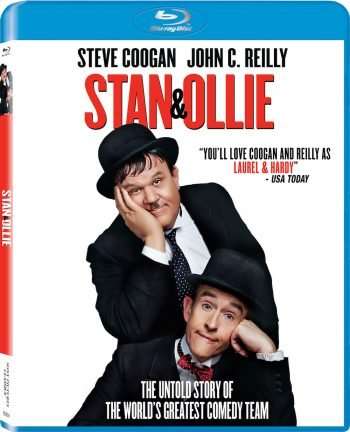 Laurel & Hardy are as popular as they come when it comes to comedy teams, and thankfully Stan & Ollie is not your stereotypical cradle to the grave biopic of the performers. Director Jon S. Baird (Filth) focuses his narrative on a tour the pair took in 1953 towards the end of their respective career.

The picture’s opening moment begins in 1937, as Stan Laurel (Steve Coogan) and Oliver Hardy (John C. Reilly) are at the top of their game. Laurel, who also writes the material for Laurel & Hardy, believes they should be getting a significant raise from movie producer Hal Roach (Danny Huston). Unfortunately Roach doesn’t see eye to eye with Laurel, and that rift would eventually lead to huge repercussions for both men.

Cut to 1953, and the pair’s movie career has all dwindled, even though they both have hopes for starring in a talked about Robin Hood project. To make a living they tour areas of Britain, and their journey takes doesn’t exactly start off with a bang due to a sparse audience. Shirley Henderson and Nina Arianda co-star as their loving wives Lucille Hardy and Ida Kitaeva Laurel.

Film buffs will surely love Baird’s attention to detail and the nuanced performances by Coogan and Reilly. One does not have to be a diehard fan of the two to actually appreciate the film, as Stan & Ollie is a resonant look at the inextricable connection between Stan Laurel and Oliver Hardy. It’s a film that was woefully overlooked last year, and hopefully now it will receive much more attention with its home entertainment release.

Special features on the Blu-ray include three deleted and extended scenes and several featurettes. An informative and lively 30-minute Q&A session, which features Baird, Henderson, Reilly, and Coogan, is also part of the extras.

Stan & Ollie is now out on Blu-ray and DVD via Sony Pictures Home Entertainment.