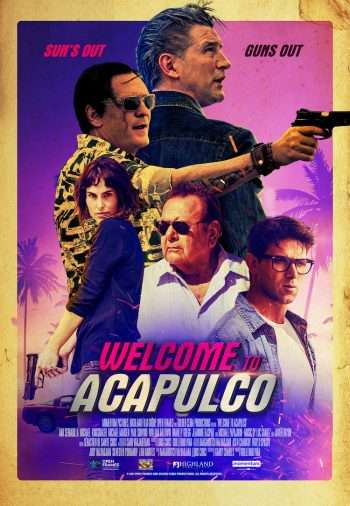 Welcome to Acapulco is not an A-list film that was released by big time Hollywood studios, but that doesn’t mean a ton of fun can’t be had. Directed with panache by Guillermo Ivan, Welcome to Acapulco is a diverting experience that should appeal to folks in need of an adrenalized action comedy.

Video game designer Matt Booth (Michael Kingsbaker) is scheduled to attend the Video Game Awards in New Mexico but thanks to getting drunk with a friend at the airport he winds up in Mexico.

Rescheduling his flight once he lands seems to be easy enough business, but now he’s being targeted by federal agents and criminals who are looking for a package that he’s supposed to be carrying. Michael Madsen co-stars as the enforcer who’s tasked with getting the package at any cost, and Ana Serradilla is the mysterious woman who attempts to keep Matt alive during this deadly journey. William Baldwin also stars as one of the high powered figures looking to capture Matt for his own personal gain.

For 88 minutes, Welcome to Acapulco doesn’t let up on the action and the comedy, and thanks to the film’s beautiful locales and solid lensing from Ivan, the picture is also blessed with eye catching visuals. Ivan knows he’s making a guilty pleasure, wall to all action movie, and he succeeds even with a modest budget. Kingsbaker and Serradilla also have enough chemistry to pull the whole thing off, making Welcome to Acapulco one of this year’s more pleasurable cinematic surprises.

Welcome to Acapulco is now available On Demand and Digital.