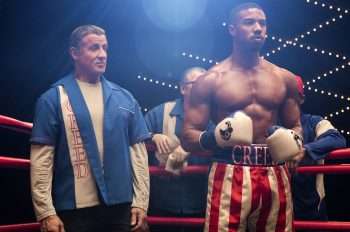 Creed II was a box office smash, amassing over $213 million worldwide. Equaling that achievement is the film’s pinpoint storytelling execution, as it did not suffer the sophomore slump that befalls most sequels.

This time out Adonis Creed (Michael B. Jordan) is the heavyweight champ who seems to have nothing left to prove. When Viktor Drago (Florian Munteanu), son of Ivan Drago (Dolph Lundgren, delivering an excellent, world weary performance), challenges him to a boxing match, Adonis doesn’t hesitate to step in the ring and defend his title. With Ivan killing Apollo Creed (Carl Weathers) in the ring years ago, Adonis is out for a bit of retribution, but this time Rocky Balboa (Sylvester Stallone) is not in his corner. Tessa Thompson rounds out the cast as Bianca, Adonis’ dedicated partner.

Running at 130 minutes, the picture had a ton to live up to thanks to the overwhelming success of Creed, and it absolutely scores a knockout punch, giving fans of the franchise equal time with Adonis and Rocky’s respective journeys. Steven Caple Jr. (The Land) directs the story sans a hitch, moving the story at a refreshingly brisk clip.

Special features on the Blu-ray and 4K UHD versions include deleted scenes and several featurettes (Fathers & Sons, Casting Viktor Drago, The Women of Creed II, and The Rocky Legacy). The deleted scenes are a must see, as one sequence has Rocky delivering a moving eulogy for pugilist Spider Rico (Pedro Lovell) who appeared in Rocky and Rocky Balboa. Another sequence features a post match encounter among Adonis and Viktor that should have been kept in the feature (Rocky and Ivan also share a moment). The final two deleted scenes give us more time with Adonis and Bianca (one sequence is an extended moment at Max’s Steaks).