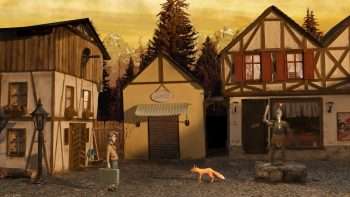 A game that claims to have the narrative echoes of Stranger Things, The X-Files, and Twin Peaks is not one to be ignored, and hopefully adventure game Trüberbrook lives up to its bold proclamations.

Gamers take on the role of Hans Tannhauser, an American scientist who wins a European vacation in the late 1960s. Initially enamored with the remote German village of Trüberbrook, Hans realizes that this sleepy environment holds a wealth of mystery and possible danger.

Each scene in the game, according to the developers, were staged with actual physical lighting. The handcrafted nature of Trüberbrook is evident in the trailer, and considering the title achieved its Kickstarter goal of $200,000 in just 30 hours, this title should have a following.

Trüberbrook hits PC, Mac, and Linux on March 12, with an April 17th release on PlayStation 4, Nintendo Switch, and Xbox One. Check out the trailer and tell us what you think!