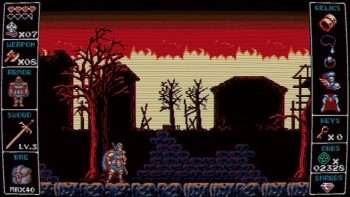 Even with the ever evolving graphics that are part of the videogame universe, the need for 8-bit driven titles is real for gamers of all ages. The critically acclaimed PC title Odallus: The Dark Call, developed by indie studio JoyMasher, is set for a PS4 and Xbox One release this spring. Nintendo Switch owners will be able to download the title on February 8 with a 20% discount launch for a limited time.

The title has gamers playing Haggis, a battle weary warrior who enters the fray once again to rescue his son from Darkness. Along with boss battles, the action platformer has over eight hours of gameplay, 50 plus enemies, eight levels and, of course, 8-bit graphics. Growing up in the 1980s, 8-bit gaming was a big part of my life, and games like Odallus: The Dark Call pays loving homage to that era while also attempting to carve out a path of its own. I’ll be reviewing this title on either PS4 or the Xbox One, but if you’ve already played the game (or want to comment on the trailer), we would love to hear your thoughts!