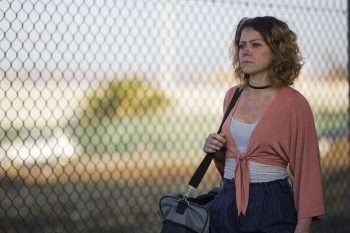 There has been heaps of critical praise thrown at Nicole Kidman and director Karyn Kusama for their work in Destroyer, but the film also boasts a stellar ensemble that helps anchor the narrative.

Tatiana Maslany (Orphan Black) is Petra, a hard living woman who goes toe to toe with detective Erin Bell (Kidman). Petra and Erin were friends years ago (Petra had no idea Erin was an undercover officer), and they were part of a crew that orchestrated a tragic bank robbery. Kusama places her story in past and present day Los Angeles, as we witness how the ravages of time has affected both women.

Though Maslany’s character, under lesser hands, could be deemed as a two dimensional criminal, she is given added dimension in Destroyer, and the actress praises Kusama’s full bodied approach to storytelling. (Click on the media bar below to hear Maslany).