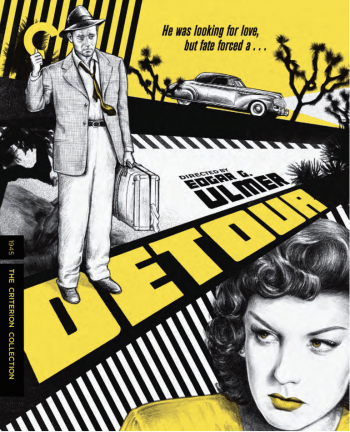 Detour, a film noir that is considered one of Poverty Row’s most distinguished features, hits Blu-ray March 19 via The Criterion Collection.

The feature centers on a pianist (Tom Neal) whose fate takes a turn for the worse thanks to a chance meeting with a cunning drifter named Vera (Ann Savage, delivering an iconic femme fatale performance). Detour also is considered B-filmmaker Edgar G. Ulmer’s finest work, and Ulmer’s innovative methods of making the most out of a shoestring budget is still revered to this day.

Special features on the disc (the film underwent a new 4K digital restoration) include the 2004 documentary Edgar G. Ulmer: The Man Off-Screen, a new interview with author Noah Isenberg (Edgar G. Ulmer: A Filmmaker at the Margins), a new program about Detour’s restoration, and an essay from critic Robert Polito.