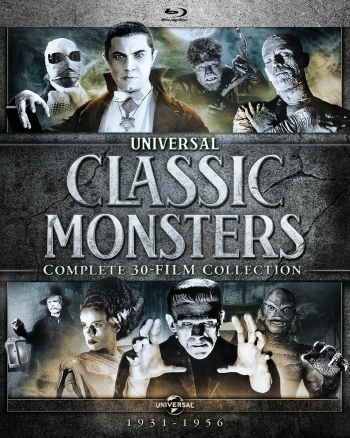 DVD and Blu-ray sets are a perfect gift for cinephiles, and at the top of that list, especially if the intended is a pure film and horror buff, is Universal Classic Monsters: Complete 30-Film Collection.

Since the 30 films, 13 feature commentaries, and numerous featurettes may feel a bit overwhelming at first, one can break down the collection by focusing on one monster at a time. Being not too familiar with the acclaimed work of director James Whale (his life was portrayed in the feature Gods and Monsters), I decided to take a look at Bride of Frankenstein, a feature that is considered the crown jewel of the Universal collection. Bride of Frankenstein showcases Whale’s visual mastery, as his fluid camera work, along with Boris Karloff and Elsa Lanchester’s iconic performances, are just among the feature’s strongest aspects. The movie’s also looks crisp as can be on Blu-ray, and I’m definitely looking forward to checking out Whale’s 1933 flick The Invisible Man, which is also featured in collection.

The booklet “The Original House of Horror” is also a nice addition, as it briefly spotlights each feature in the set and profiles such Universal icons as Karloff, Lanchester, makeup artist Jack Pierce, and Bela Lugosi. Universal Classic Monsters: Complete 30-Film Collection is now out on Blu-ray and DVD.