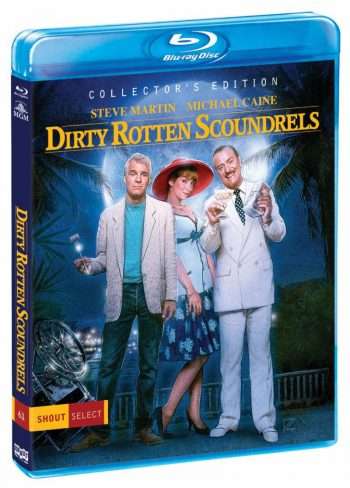 Dirty Rotten Scoundrels, a first rate comedy headlined by Steve Martin and Michael Caine, is hitting Blu-ray in a collector’s edition set on January 22 via Shout! Factory. The remastered feature (taken from a 2K scan of the film) centers on two rival con men (Caine, Martin) who attempt to take $50,000 from a heiress (late actress Glenne Headly).The first person to complete the operation gets to stay in the south of France, while the loser leaves town!

Frank Oz, who worked with Martin in 1986’s Little Shop of Horrors, directed the picture, which in turn was a remake of the Marlon Brando and David Niven comedy Bedtime Story. Coincidentally, Oz would later director Brando in the 2001 feature The Score.

Special features on the disc includes a new interview with scribe Dale Launer, a behind the scenes featurette, and audio commentary from Oz.