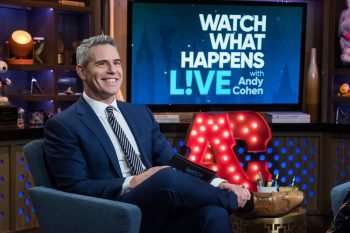 Andy Cohen is one of the most prolific producers in the reality TV genre, having brought us the Real Housewives shows and many more shows over the past 15 or so years. He’s also done a lot of work on camera, hosting Watch What Happens: Live and making appearances on several of his other shows. He’s even filled in as a guest host on The View and Live! With Kelly. So, by now, he should be pretty comfortable talking in front of a microphone, even when he’s the one answering the questions instead of asking. However, he told us there’s still one person who can make him nervous during an interview: legendary radio/TV personality Howard Stern.

Watch What Happens: Live airs Sunday through Thursday on Bravo, and check http://www.bravotv.com to find out when his Housewives shows air.