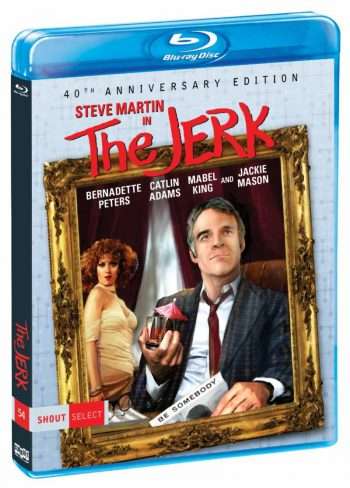 In celebration of its 40th anniversary, The Jerk will be released on Blu-ray via Shout Select on December 18. The feature, which marked Steve Martin’s feature film debut, centers on Navin Johnson, the adopted son of a black sharecropping family in Mississippi. Gradually realizing the world is a big place, Navin ventures out to find his “special purpose. The feature, which co-stars Bernadette Peters, was directed and co-written by Carl Reiner (Martin received a story credit). T

This version was remastered from a brand new 2K scan and contains new bonus features. Extras include a conversation with Steve Martin and Carl Reiner, a conversation with writers Michael Elias and Carl Gottlieb, learn how to play “Tonight You Belong To Me,” and The Lost Film Strips of Father Carols Las Vegas De Cordova.

Is The Jerk one of your favorite Steve Martin films? Feel free to comment below!