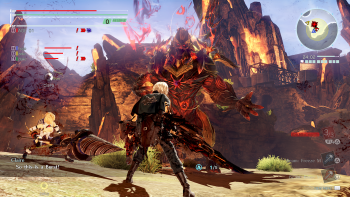 The storyline centers on an Earth that is seemingly beyond saving due to the destruction of beasts known as Aragami. It’s up to a group of heroes known as God Eaters to save humanity and vanquish these monsters. The only way to defeat the Aragami is by taking them on with God Arcs, special weapons that are designed to help the God Eaters complete their mission. The game will also support English and Japanese audio, which is a first for the franchise. The new God Eater 3 trailer shows the various weapons (they’re called God Arcs) the heroes employ during their battles.

Are you a fan of the God Eater series? Check out the trailer below and tell us what you think!

‘Blair Witch’ Heads Back To The Woods...

One of the highlights from the Xbox E3 Briefing, especially if you're a movie fan, is the announcement of the upcoming game Blair Witch....
Read more

Close To The Sun, a first person horror game from publisher Wired Productions and game studio Storm in a Teacup, arrives on PC May...
Read more

A game that claims to have the narrative echoes of Stranger Things, The X-Files, and Twin Peaks is not one to be ignored, and...
Read more

When Gina Rodriguez was born, Scooby-Doo was already a cultural icon. Starting with the 1969 animated series and continuing through several movies, the scruffy...
Read more

I Still Believe, the biopic about Contemporary Christian artist Jeremy Camp, was a surprise hit earlier this year -- first in theaters, and then...
Read more

Lucifer fans are happy as hell these days. Not only will they soon be getting a fifth season of the show on Netflix, but...
Read more

Like so many other television shows, America's Got Talent has been affected by the COVID-19 pandemic. But while many shows have gone into an...
Read more

When a TV show gets rebooted with some of the old roles now being played by new actors, it can be frustrating and intimidating...
Read more

Michael Pitt (Boardwalk Empire) and Ron Perlman (Sons of Anarchy) star in Run With The Hunted, a thriller that centers on Oscar (Pitt), a...
Read more

Directed by Jonathan Milott and Cary Murnion, Becky features Lulu Wilson, a youth who spends the weekend with her father Jeff (Joel McHale), his...
Read more

Directed by Benjamin Ree, The Painter and The Thief centers on Barbora Kysilkova, a Czech artist who Karl-Bertil Nordland one of the people who...
Read more