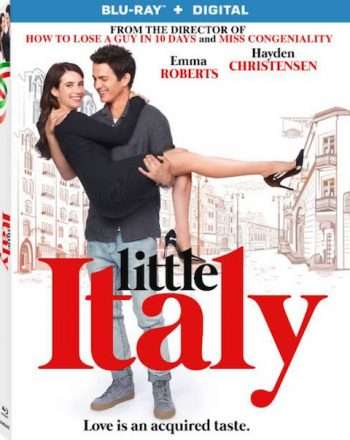 Little Italy, a romantic comedy headlined by Emma Roberts (We’re The Millers, The Blackcoat’s Daughter) and Hayden Christensen (Shattered Glass, Star Wars: Episode III – Revenge of the Sith), hits Blu-ray, DVD and Digital on November 20 via Lionsgate. The picture centers on Nikki (Roberts), an ambitious chef who moves back to her Toronto neighborhood and rekindles a friendship with childhood mate Leo (Christensen). Their family are owners of rival pizza restaurants, and a budding romance between the two should lead to its share of drama. The feature co-stars Jane Seymour, Danny Aiello, Andrea Martin, and Alyssa Milano. Donald Petrie, an underrated director whose films include Miss Congeniality and How To Lose A Guy in 10 Days, directs the flick. Extras include a featurette on the making of Little Italy which contains interviews with the cast and crew.

Do you think Hayden Christensen and Emma Roberts have chemistry? What is your favorite Petrie film (I love the overlooked Whoopi Goldberg film The Associate). Feel free to comment below!