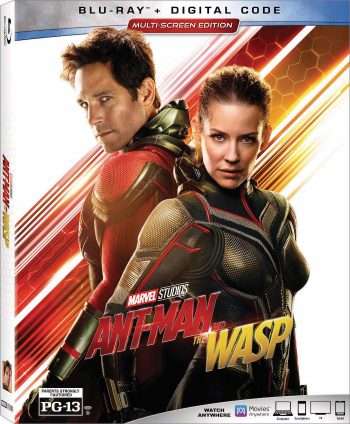 Ant-Man and the Wasp, which made over $617 million worldwide, is coming out on Blu-ray October 16 (it hits digital on October 2). As usual with Marvel titles, the extras on the disc are plentiful. Along with returnees Paul Rudd and Evangeline Lilly, the movie co-stars Michelle Pfeiffer, Laurence Fishburne, and Walton Goggins.

Special features on the Blu-ray include several making-of featurettes (“Back in the Ant Suit: Scott Lang,” “A Suit of Her Own: The Wasp,” Subatomic Super Heroes: Hank & Janet,” “Subatomic Super Heroes: Hank & Janet,” “Quantum Perspective: The VFX and Production Design of Ant-Man and The Wasp,” Gag Reel and Outtakes, and director’s intro by Peyton Reed. Fans of deleted scenes will be treated to two sequences (“Worlds Upon Worlds” has Janet taking Hank through the quantum realm and “Sonny’s on the Trail,” which contains an extra scene with Sonny Burch (Walton Goggins) and his crew).

Digital exclusives include the featurettes “10 Years of Marvel Studios: The Art of the Marvel Cinematic Universe” and “Online Close-Up Magic University.

Are you a fan of Ant-Man and the Wasp, and if you haven’t seen it, are you looking forward to its Blu-ray and Digital release? Feel free to comment below!