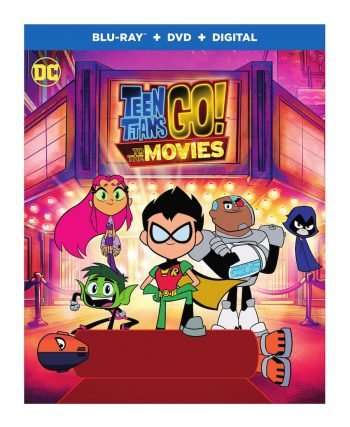 Teen Titans GO! To The Movies, the first project from the animated series to hit the silver screen, heads for Blu-ray and DVD October 30 via Warner Bros. Home Entertainment. The story centers on the Teen Titans’ foray into making movies, as Robin (Scott Menville) is determined to get director Jade Wilson (Kristen Bell) to tell their story. The group’s venture to Hollywood is more than just a star studded affair, as the villain Slade (Will Arnett) is determined to thwart their plans!

Special features include the Lil Yachty music video “Teen Titans GO! Rap,” Storyboard Animatics (“Time Cycle” and “The Final Battle”), the mini-movie DC Super Hero Girls: The Late Batsby, the exclusive song (not in the film) “Everything Is Fake,” Red Carpet Mayhem, and the segments “Teen Titans GO! To The Movies: WB Lot Shenanigans” and “Teen Titans GO!: Translated.” The DVD version comes with one extra (“Storyboard Animatics”). Are you a fan of the Teen Titans GO! animated series, or were you a longtime fan of these DC Comic characters before the series even hit the air? Feel free to comment below!