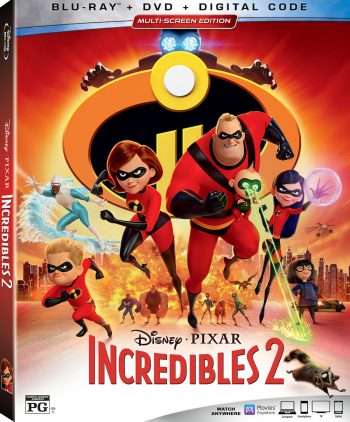 Incredibles 2, a bonafide box office hit that made over $604 million domestically, hits Blu-ray and DVD on November 6. The animated genre’s most beloved superhero family will undoubtedly lead to brisk home entertainment sales, the Blu-ray release comes with a plethora of special features.

Whether or not you prefer the original over the sequel, that opinion may change, as 10 deleted scenes highlight some of the extras on the Blu-ray version (the segments come with introductions). For fans looking into a bit of creative inspiration, the feature “Strong Coffee: A Lesson in Animation with Brad Bird” focuses on the director’s mentorship under legendary Disney animator Milt Kahl. The featurette also focuses on Bird’s early years at Disney Animation Studios and his work with Pixar. Audio commentary is also provided by supervising animators Alan Barillaro, Tony Fucile, Dave Mullins, and animation second unit and crowds supervisor Bret Parker.

The beloved and emotionally resonant Bao is also featured on the Blu-ray version, and an accompanying featurette has director Domee Shi discussing how her love for food, and most importantly the bond she has with her mother, inspired the film. Bao, along with the animators audio commentary, are the extras featured in the DVD version.