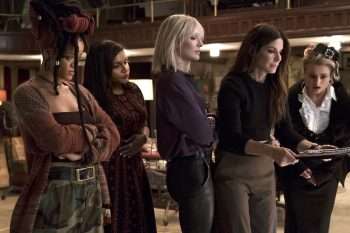 Sandra Bullock is good friends with Gravity co-star George Clooney (he also executive produced Our Brand Is Crisis), so the A-list actress seems like the perfect choice to steer the Ocean’s franchise into a new direction. Ocean’s 8, which hits Blu-ray and DVD on September 11, proved to be a box office hit (it made over $294 worldwide) and a sequel (though it hasn’t been announced) should be in the offing.

Just released from prison, Debbie Ocean (Sandra Bullock) concocts a plan to steal a $150 million diamond necklace that will be worn by actress Daphne Kluger (Anne Hathaway) at the Met Gala. Along with her partner-in-crime Lou (Cate Blanchett), the pair enlist a hacker (Rihanna), diamond expert (Mindy Kaling), pickpocket (Awkafina), fashion designer (Helena Bonham Carter), and a Connecticut based fence (Sarah Paulson) to pull off the operation. Though Ocean’s Eleven filmmaker Steven Soderbergh and Clooney are not present, Ocean’s 8 follows the tried and true formula while carving out territory of its own. Filmmaker Gary Ross (Free State of Jones) brings a light touch to the proceedings, and fans of the previous films should also be satisfied with the breezy yet intricately woven Ocean’s 8.

Special features on the Blu-ray include two deleted scenes which give a bit more spotlight to Sarah Paulson’s character (her banter with Bullock, most notably in the second scene, is fun to watch). Most of the cast, Ross, co-writer Olivia Milch (Deadwood producer David Milch is her father), costume designer Sarah Edwards are among the interviewees who discuss the movie in the featurettes “Ocean’s 3.0,” “Reimagining the Met Gala,” and “A Heist In Heels.”

Arkansas, based on a novel by John Brandon, centers on Kyle (Liam Hemsworth) and Swin (Clark Duke), two underlings who work for a drug...
Read more