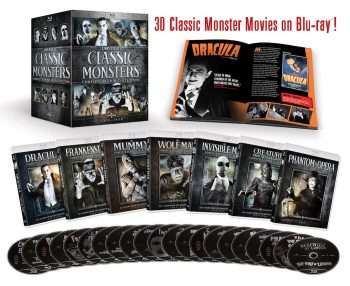 With August coming to a close, a Blu-ray release that should be at the top of the list is Universal Classic Monsters: Complete 30-Film Collection.

Universal is known for its conic monster flicks that also launched the careers of such icons as Bela Lugosi, Boris Karloff, and Lon Chaney Jr., and having these titles in one’s Blu-ray collection is a cinephile’s dream. Starting with 1931’s Dracula, the movies cover 25 years of cinema history ending with 1956’s The Creature Walks Among Us.