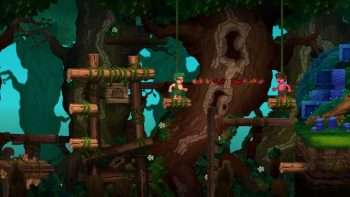 During my many years as a gamer I’ve never played a title wherein a goblin is the main character in a story, but that’s not the only reason why The Path of Motus may be a keeper.

Three years in the making, the story centers on Motus, a young goblin who, though raised in a small village, has big dreams. Placing adversity in his path are numerous bullies who use the power of their negative words and influences in an attempt to stop his progress. As a fan of platform and side scrolling titles, I’ll definitely give the game a shot, especially since it has more than button mashing ambitions:

“When I was younger, I was interested in what made bullies act so aggressive,” said The Path of Motus game designer Michael Hicks. “As time went on I began to befriend some of them, and learned they had either been bullied themselves earlier in life, had really bad family lives, or were just simply jealous of other people; I kept all of this in mind as I designed the game. As Motus gradually grows from a child to an adult, you’ll get to explore the motivations of the characters you meet, and I expect you’ll have some surprising moments in the process! I feel the discussion around this topic often ignores the root causes of bullying, so hopefully this game lets us see how our own actions potentially contribute to this issue.”

The Path of Motus hits Xbox One, Steam and PlayStation 4 on July 17. Check out the release trailer and tell us what you think!

Earthlock 2, developed by Snowcastle Games, is currently in development for PC, PlayStation 5, Xbox Series X, PlayStation 4 and Xbox One. In celebration...
Read more

Action RPG Dreamscaper, with its roguelite aesthetic, has an interesting and surreal premise that hopefully will seamlessly blend with its hack and slash stylings. Gamers...
Read more