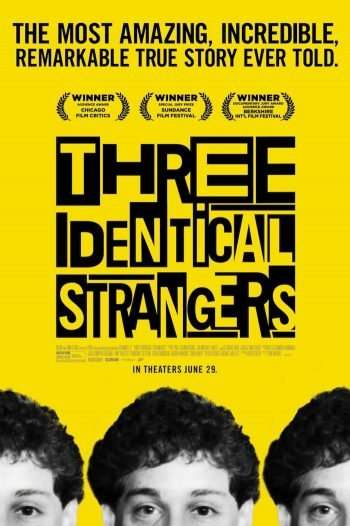 Three Identical Strangers is the true story of triplets (Eddy Galland, David Kellman, Robert Shafran) who, at the age of 19, realize that they are triplets. Separated at birth and raised by three parents from different socio-economic backgrounds, the guys have a ton of catching up to do.

Their 1980 discovery immediately catapults them to fame, as they became the toast of New York and were featured in various news articles and television program (their talk with Phil Donahue is featured in the documentary. The trio even opened up their own restaurant some years later.

Finding your literal blood brothers had its drawbacks, especially when they discovered their respective adoptions were part of a bigger research study on the “nature vs. nurture” theory. While attempting to explore if individuals can expand beyond their genetic makeup thanks to their environment is intriguing, this research was absolutely inhumane.

An incisive and at times heartbreaking look at how lives can be changed by a simple decision, Three Identical Strangers is a compelling mystery that will keep you intrigued (and understandably distressed) until the film’s closing moments.