Benicio Del Toro Aims For Balance With ‘Sicario: Day of the Soldado’ 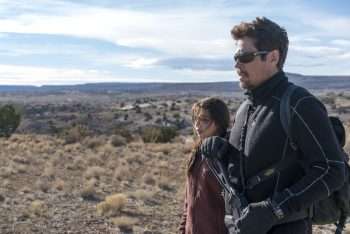 Benicio Del Toro and Josh Brolin return for another round of drug war storytelling with the highly anticipated Sicario: Day of the Soldado. Sicario screenwriter Taylor Sheridan, who received acclaim for his directing debut Wind River, also penned the sequel.

With all the explosions and killings that are bound to happen, Sicario: Day of the Soldado still has space for character driven storytelling.

“That was the tricky thing about this film,” said Del Toro. “How do we get this evolution . . . because this movie takes place in real time. It’s short (the movie takes place within a 3-4 day period) and packed with action. It’s packed with all kinds of interesting stuff. I think the movie has a great balance of the thriller (elements) and character (development). It’s a good balance.”

Click on the media bar to hear Del Toro praise teenage actress Isabela Moner, who may be one of the biggest surprises to come out of the film: