Blu-Ray Spotlight: ‘Father Figures’ Is A Family Comedy With A Ton of Heart 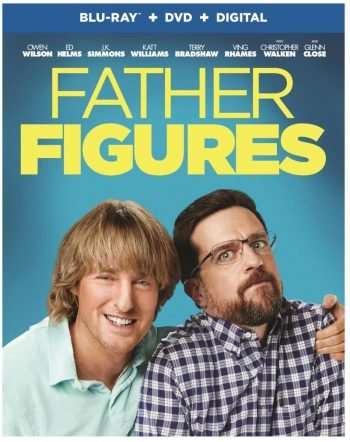 Now out on Blu-ray and DVD Father Figures centers on Kyle (Ed Helms) and Peter (Owen Wilson), fraternal twins who, on their mother’s (Glenn Close) wedding learn that their late father is actually not their dad! Determined to find their biological father, the pair go on a quest where they meet several guys who could be their dad (Terry Bradshaw plays himself, JK Simmons is a criminal, and Christopher Walken is a veterinarian).

This road comedy, which if one judges by the poster, may seem like an innocuous, forgettable affair but surprisingly the flick has a ton of heart and, running at 113 minutes, a well developed storyline. Credit goes to director Lawrence Sher for making Kyle, who is a stuffy proctologist, a rather unlikable dude for a substantial portion of the narrative. Peter, a millionaire who lucked into his money (he’s the logo for a popular drink), is the more easygoing of the two, and his zest for life absolutely rubs Kyle the wrong way. Bradshaw, Simmons, and Walken all have their moments to shine, but it’s Katt Williams as a hitchhiker they pick up along the way who steals the show.

Along with being a solid and ultimately heartwarming comedy, Father Figures also has 21 minutes of deleted scenes that are featured on both the Blu-ray and DVD versions. These sequences included more moments with Glenn Close, a bonding moment between Kyle and his son, and a scene from Peter and Kyle’s childhood that establishes their rivalry. Overall, Father Figures is definitely worth a look if you’re a fan of the two leads but, more importantly, if you dig comedies that unabashedly pulls your heart strings.