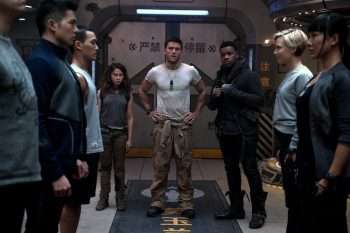 (L to R, center) CAILEE SPAENY as Amara, SCOTT EASTWOOD as Lambert and JOHN BOYEGA as Jake with Amara’s fellow Cadets in “Pacific Rim Uprising.” The globe-spanning conflict between otherworldly monsters of mass destruction and the human-piloted super-machines built to vanquish them was only a prelude to the all-out assault on humanity.

Pacific Rim Uprising unseated Black Panther to capture the #1 spot at the box office, taking in $28 million in its debut weekend. Black Panther had another strong weekend with $16.6 million, good enough for second place while the faith based drama I Can Only Imagine continued its successful run with $13.8 million. Here’s the top 10: