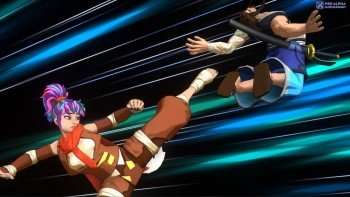 Now in Steam Early Access, the visually arresting 2D brawler Fantasy Strike will be released this summer (exact date tbd). This debut will coincide with its debut on the PlayStation 4 console and PC.

“Fantasy Strike is the perfect fighting game for Switch,” said David Sirlin, lead designer of the title. “The Switch is a take-anywhere console, so fighting games would be great on it if not for how notoriously difficult they are to control Usually, playing a fighting game on a JoyCon would be tough, but Fantasy Strike is designed specifically for that. Detach the JoyCons, give one to a friend, and you can play a deep, strategic fighting game anywhere.”

During the latest patch, professional voice acting and facial animation for all 10 characters, along with a new Team Battle mode, have been added. Sirlin Games has also combined its own network tech with GGPO networking to give players a more seamless gaming experience. We’ll be reviewing the game in the coming months (possibly on the PlayStation 4) so stay tuned for our coverage!