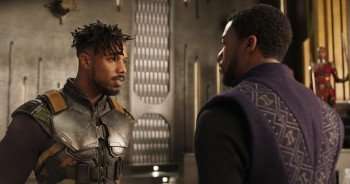 Black Panther continues its amazing box-office run as it made $65.7 million over the weekend to beat newcomers Red Sparrow #2, $17 million) and Death Wish (#3, 13 million). To date, Black Panther has amassed over $500 million domestically. Here’s the top 10:

5. Peter Rabbit – To date, the flick has made over $84 million domestically. This weekend it takes in $10 million