Blu-Ray Review: Sam Elliott Takes It To The Limit With ‘Shakedown’ 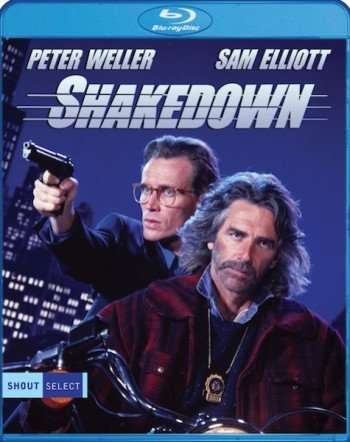 As always, Shout! Factory manages to pull forgotten films from the past to satiate many a cinephile. Case in point is Shakedown, a 1988 flick which, since Lethal Weapon was made the previous year, seems like a flick that tried to capitalize on the buddy/buddy crime drama dynamic. Peter Weller and Sam Elliott may not reach the cinematic heights of Nick Nolte and Eddie Murphy (48 Hrs.) or Danny Glover and Mel Gibson, but they do a fine job with Shakedown. If you love this action driven genre where the two leads are seeming diametrically opposite in character, then Shakedown doesn’t disappoint.

Penned and directed by James Glickenhaus, Shakedown centers on Roland Dalton (Weller), a Jimi Hendrix loving defense lawyer who’s about to get married and settle down for a life in Wall Street. But big money dreams and a life in the suburbs isn’t what he’s all all about, and when he believes a drug dealer (Richard Brooks) killed an undercover police officer in self-defense, Roland is immediately on the case. Roland’s determination to ensure his client doesn’t receive a first degree murder charge leads him into a dangerous territory of corrupt cops, but thankfully his good buddy Richie Marks (Sam Elliott) is actually an upstanding police officer.

Roland and Richie team up to take down the police ring whose profiteering played a huge part in the criminal’s predicament, but considering it’s two men against a seemingly indestructible crew, this mission may not go as planned.

Along with featuring several show stopping action scenes (including one with Sam Elliott hoping on a plane to catch the bad guys) and infusing solid character development (though the film spends most of its time focusing on Roland’s journey, this is a well written narrative). Elliott does most of the flick’s refreshingly ambitious action sequences with Weller anchoring most of the drama).

Last, but definitely not least, there is a standout moment at a diner as Roland and Richie share their mutual heartbreaks in the love department. Richie recounts a lost love/dog story that is absolutely one of the saddest canine stories I’ve heard in cinema, and Shakedown is worth it just for that standout sequence.

Special features on the Blu-ray include audio commentary from Glickenhaus (which is moderated by an interviewer), a video introduction from Glickenhaus, theatrical trailer, photo stills and a must see segment in which the director discusses how he once saved Miles Davis’ life!!

Shakedown is now available on Blu-ray via Shout! Factory.