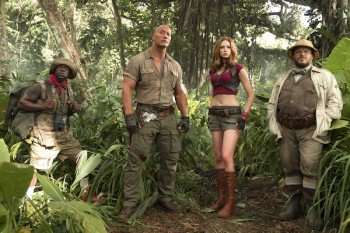 Jumanji: Welcome to the Jungle was the #1 movie over the weekend with $20 million, even though the high profile flicks 12 Strong and Den of Thieves were nipping at hits heels. Here’s this weekend’s top 10:

3. Den of Thieves – This Gerard Butler/50 Cent flick which looks like a Heat redux makes $15.3 million.

7. The Commuter – Liam Neeson action flick drops to seven in its second weekend with just $6.7 million.

8. Star Wars: The Last Jedi – Grossing over $604 million domestically, the picture takes in $6.6 million this weekend.

10. Forever My Girl – Flick debuts with a less than auspicious $4.7 million.