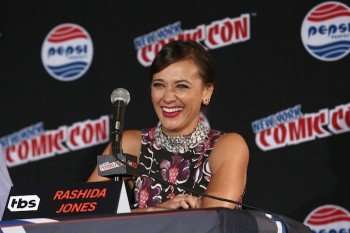 Emmy nominated actress Rashida Jones will be honored by the SAG-AFTRA Foundation with the Actors Inspiration Award. The honor spotlights artists who make a difference in the community by championing philanthropic causes. Jones, a veteran of The Office and current producer/star of Angie Tribeca, will receive the award at the foundation’s 8th Annual Los Angeles Golf Classic on June 12.

Jones has worked with the International Rescue Committee, a nonprofit which delivers lifesaving care to people fleeing conflict and natural disaster and she is also a supporter of the SAG-AFTRA Foundation’s online children’s literacy program Storyline Online. Viola Davis, Lily Tomlin, and Chris Pine are among the other actors who’ve worked with Storyline Online. Jones has also been a celebrity ambassador for the youth organization Peace First and has worked with Amnesty International, the Elton John AIDS Foundation, and The Trevor Project.

“We are excited to present Rashida Jones with our Actors Inspiration Award and honor her tireless dedication for tackling issues around global poverty, improving health outcomes for people battling AIDS and cancer, and for using her artistic platform to support several important charities, including our very own children’s literacy initiative Storyline Online,” said SAG-AFTRA Foundation President JoBeth Williams. “Rashida’s generosity and commitment to giving back to the global community is an inspiration, and we are proud and grateful she will accept this honor.”

Past recipients of the award include Kerry Washington, Sofia Vergara, and Leonardo DiCaprio.