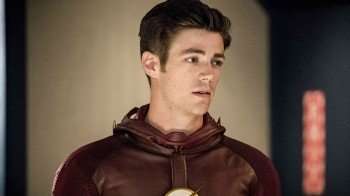 The Flash star Grant Gustin and his co-star Tom Felton (he plays Doctor Alchemy on the series) have been added to the show lineup of the Silicon Valley Comic Con. Created by Steve Wozniak, SVCC is a pop culture and technology expo that takes place at the San Jose Convention Center in San Jose, Ca on the April 21-23 weekend.

Grant and Felton will appear together for a fan Q&A on Sunday, with Felton, who’s best known known for his work as Draco Malfoy in the Harry Potter flicks, also appearing at SVCC on April 22nd. Previously announced guests include John Cusack, Gina Torres (Suits, Firefly), Billy Boyd (The Lord of the Rings trilogy), Robert Englund (Nightmare on Elm Street films) and Steven Yeun (The Walking Dead).

Along with his work on The Flash, Gustin has appeared on Arrow, Supergirl (which had him reunite with Glee castmate Melissa Benoist), and Legends of Tomorrow. Felton also starred in Rise of the Planet of the Apes, Belle, and Risen.