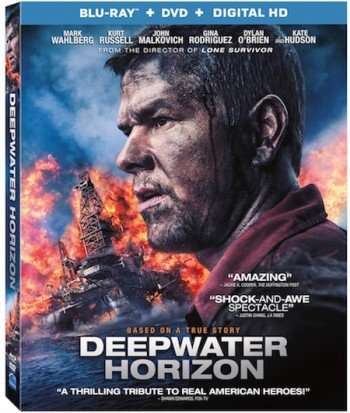 Director Peter Berg and actor/producer Mark Wahlberg are passionate about bringing real life stories to the screen. Whether it’s their new film Patriots Day or the just release Blu-ray Deepwater Horizon, the pair are bringing value added content to non-fiction narratives. The care and thought that is put into their films is also evident with the Deepwater Horizon Blu-ray, which comes with a slew of special features.

The film centers on the 2010 BP oil spill and its affects on the 126 people aboard the Deepwater Horizon offshore oil rig. Wahlberg stars as Mike Williams, the chief electronics technician of the rig, and Kurt Russell is Jimmy Harrell the Transocean offshore installation manager. John Malkovich, serving as the film’s antagonist, plays BP exec Donald Vidrine.

The Deepwater Horizon special features leaves no stone unturned regarding the making of the film. Clocking in at 51 minutes, Beyond The Horizon features interviews with the cast on the making of the movie, while “Captain of the Rig: Peter Berg” is an 18-minute examination on the filmmaker. The production featurette “The Fury of the Rig” (27 minutes) centers on the various sets that went into the production design of the movie. For movie fans who love focusing on the visual approach, the 18 minute “Deepwater Surveillance” contains unedited footage on how the cameras were set-up during certain sequences of the film. Last but definitely not least, “Work Like an American” (18 minutes) is a promo video centering on blue collar workers who make a difference (Deepwater Horizon survivor Caleb Holloway, now a firefighter, is also spotlighted).

In conjunction with the Blu-ray, the Deepwater Horizon VR app, available on iOS and Android, offers audio commentary from Berg and editor Colby Parker Jr. as they discuss the special effects that were utilized in the film.