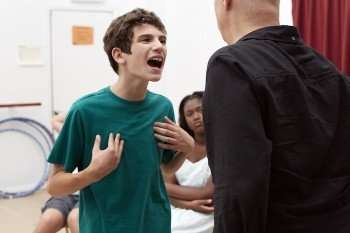 Charles Mingus’ seminal composition “Scenes in the City” is the perfect marriage of music and the spoken word, as actor Mel Stewart plays a New York City denizen with undying love for jazz. Though mired in financial difficulties and universal problems that may never go away, his spirits are lifted once Miles Davis or Charlie Parker start to play.

The harmonies of New York City, whether blended or discordant, are interwoven in director/writer Ira Sachs’ Little Men, a beautifully rendered and subtly sublime work that, even in its more quiet moments, packs a devastating punch. Sometimes life’s most heartbreaking and tragic moments aren’t played out in operatic fashion, and the people behind this deceptively ambitious story understand that, even if there are simply things that are beyond their reach, life must go on.

Jake (Theo Taplitz) is an introspective 13-year-old who’s a budding artist. Though he’s not too thrilled with his family’s (Jennifer Ehle and Greg Kinnear are his parents) move from Manhattan to Brooklyn after his grandfather’s passing, Jake’s newfound friendship with Tony (Michael Barbieri) dramatically eases the transition. When a rent dispute between his parents and Tony’s dressmaker mother (Gloria’s Paulina Garcia) turns ugly, their friendship is put to the test and a once blissful summer turns bittersweet.

The wonder behind Ira Sachs’ work (his 2014 drama Love is Strange is just as effective) lies in his naturalistic approach to storytelling, and in just 85 minutes we get a concise look at the heartaches and joy that exist within both families. Taplitz and Barbieri deliver first rate performances, and hopefully this film will usher in even more work for the two (both are magnetic in their own fashion). Along with the perfect casting choices of the two leads, Sachs also scored by landing a trio of talented actors with Garcia, Ehle, and Kinnear. With such a power packed ensemble, he could have turned Little Men into a showy, monologue driven, melodramatic affair, and though that version would also have its merits, Sachs’ decision to keep the volume down enables viewers to fully appreciate the story’s intricate details.

By the film’s close we are invited to briefly interpret the world through Jake’s eyes. Whether it’s a painting housed in a museum or even kids at play at the local park, the scenes of the city continue to evolve before us. Whether or not we accept that fact is neither here nor there, but thankfully those notes are in full view with Little Men.

***Little Men is now playing in select theaters. For a further discussion of Little Men, check out this week’s episode of CinemAddicts.