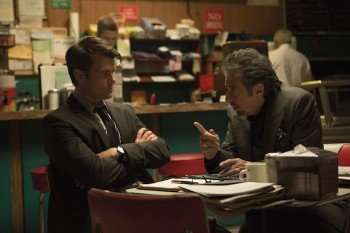 With superhero and animated franchises serving as the king of the cinematic kingdom, big budget thrillers have gone the way of the dodo bird, and one would assume an Al Pacino and Anthony Hopkins thriller would have had a much bigger release in the 1990s.

But living in the past can be a bad thing, and thankfully Misconduct features the aforementioned actors along with a solid cast to craft a first rate suspense flick which should keep you on your toes.

Josh Duhamel is Ben Cahill, an ambitious lawyer who will do everything it takes to climb up his firm’s ladder and impress his boss (Al Pacino). Ben’s laser focused career goals is one reason why his marriage to Charlotte (Alice Eve), a dedicated and overworked nurse, is going south.

When Ben’s mentally unstable ex-girlfriend Emily (Malin Akerman) reenters his life (via a Facebook friend request!) and divulges that her billionaire boyfriend Denning (Anthony Hopkins) is running a corrupt pharmaceutical business, Ben sees a multi-million dollar lawsuit in the making.

With dreams of glory and a rich payday right around the corner, Ben can’t see the forest from the trees. Thanks to a dying, motorcycle riding hitman who’s obsessed with truth (Byung-hun Lee) and a series of double crosses, mayhem and murder is now the order of the day, as Ben’s new goal is to simply stay alive.

Director Shintaro Shimosawa references the work of visual master Brian De Palma (Body Double, Dressed To Kill) as an influence for Misconduct, and the film’s greatest asset is Shimosawa’s visually arresting and cerebral approach to setting up a sequence. Most of today’s movies focus on pushing the narrative, relying on coverage and quick cutting to tell their story, and while that aesthetic can oftentimes be effective, the art of frame composition is usually lost in the process. If you love De Palma or Chan-wook Park’s (Stoker) approach to storytelling, then Misconduct should be a compelling watch.

Anthony Hopkins and Al Pacino are well aware they are working within the baroque and operatic universe of a thriller, and they fill their respective monologues with scenery chewing gusto. Though Josh Duhamel seems a bit over matched sparring with these two heavyweights, it actually works, as Ben initially comes off as a pawn in a much bigger chess match. Though Duhamel doesn’t get to paint with as many colors as the film’s supporting players, he does a solid job in anchoring the narrative.

In thrillers, the girlfriend or wife role is usually given short shrift, but highly overlooked actress Alice Eve puts an indelible stamp to the proceedings, delivering the film’s knockout performance. With its stylized flair, Misconduct is an acquired taste that will have its share of detractors. Brian De Palma says that “the camera lies 24 frames per second,” and for many this manipulation equates to highly watchable cinema.  Shintaro Shimosawa understands that, even in today’s moviegoing climate, the thrill of a thriller is never gone, and hopefully Misconduct finds its way to welcoming shores.

Misconduct comes out in limited theatrical release and On Demand February 5, 2016. The movie is also discussed on this week’s CinemAddicts, a movie review podcast which is currently available on iTunes.