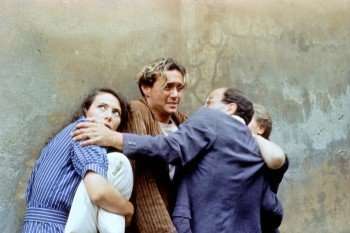 Whether it’s Auguste and Louis Lumière or Joel and Ethan Coen, brothers making an impact on cinema isn’t anything new. At the top of this list is Paolo and Vittorio Taviani, filmmakers whose careers date back to the 1950s. Thanks to Cohen Media Group, three of their films (The Night of the Shooting Stars, Kaos, and Padre Padrone) are headed to the Ahyra Fine Arts theater. The Los Angeles based retrospective runs January 29-February 4.

Winner of the Grand Jury Prize at the Cannes Film Festival, The Night of the Shooting Stars’ narrative is told in flashback, as an adult woman recounts her days living in the Tuscan village of San Martino. Though the film has its fable like elements, most of the storyline is grounded in drama, as the town’s inhabitants struggle to survive under Nazi occupation while hoping for an eventual end to World War II.

Released in 1984, Kaos is an adaptation of Luigi Pirandello’s short stories and, filtered through the universe of the Taviani brothers, focuses on five different tales of Sicilian life. Like The Night of the Shooting Stars, Kaos combines a mixture of fable like storytelling and realism.

The Taviani brothers’ passion for neorealism (Paolo Taviani jumped into filmmaking after reportedly being inspired by Roberto Rossellini’s Paisan) is evident in much of their work (most recently in 2012’s Caesar Must Die), and that dedication to detail is brought to full effect with 1977’s Padre Padrone. Winner of Cannes’ coveted Palme d’Or, the story is based on the autobiography of Gavino Ledda, the son of a Sardinian shepherd whose early struggles for an education eventually led to a successful scholarly life.

For more information on the Taviani Brothers retrospective, check out the Laemmle’s official site.