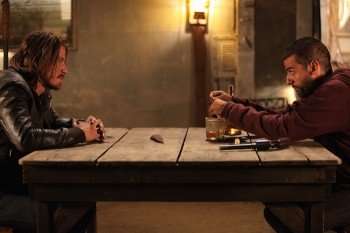 Mojave is filled with top notch talent, as Inside Llewyn Davis stars Oscar Isaac and Garrett Hedlund reunite as two guys who are on a deadly path to destruction. Thomas (Hedlund) is a highly successful Hollywood filmmaker and artist whose life has become a bore, and in a fit of existential angst he heads out to the desert to either find himself or end it all.

During his journey he intentionally crashes his jeep, screams back at a pack of howling coyotes in the distance and, most importantly, encounters Jack (Isaac), a violent drifter who preys on the innocent.

Jack’s intended victim is far from scared, as Thomas is ready for a little violence of his own. As Thomas leaves the desert and head back into town, Jack isn’t too far behind, and Los Angeles becomes the latest setting for their confrontations.

Written and directed by The Departed screenwriter William Monahan, Mojave’s writing is laser sharp whenever Jack and Thomas play their destructive chess match, and as a tight fisted thriller Mojave, though not exactly at the top of its genre, delivers the goods. The Departed star Mark Wahlberg does humorous, scenery chewing work as Thomas’ producing partner, a Hollywood showbiz type who’s drowning in an excess of Chinese food and prostitutes. Walton Goggins, the best part of The Hateful Eight, also lends a helping hand as Thomas’ subdued and eccentric agent.

What may turn many viewers off is the idea of following two sociopaths physically and mentally attack each other for 93 minutes, and fans who hate watching movies sans sympathetic protagonists should steer clear of Mojave. The movie’s unapologetic descent into a heart of darkness, as Hedlund and Isaac battle it out to the point of delirium, always kept me intrigued.

As evidenced with his scripts for Kingdom of Heaven, the aforementioned The Departed, and the overlooked Mel Gibson flick Edge of Darkness, Monahan has a knack for gritty, testosterone driven adventures. The story loses a bit of its verve and focus when dealing with the people that surround Thomas’ universe (although seeing Louise Bourgoin, even in an intentionally undercooked role, is a pleasure) and its final moments, though subtly executed, doesn’t land the knockout punch.

Even with its flaws, Mojave is lifted by charismatic performances by its two leads and solid enough storytelling from Monahan. The movie opens Friday, January 22 in select theaters and will also be available on Amazon Video

Mojave is also discussed this week on the new podcast CinemAddicts, a collaboration between Hollywood Outbreak and Cold Cockle Productions head (& film fanatic) Anderson Cowan. To rate, review, and subscribe to CinemAddicts, please click here and listen below:

The new film Made in Italy us about a man and his son who work together to restore a house they've inherited in the...
Read more

Amazon Studios announced today that it has ordered a pickup of the new hour-long series A League of Their Own, from Sony Pictures Television,...
Read more

For a pair of time travelers who've hopped throughout history, 2020 might seem to be an odd destination. But, as fate would have it,...
Read more