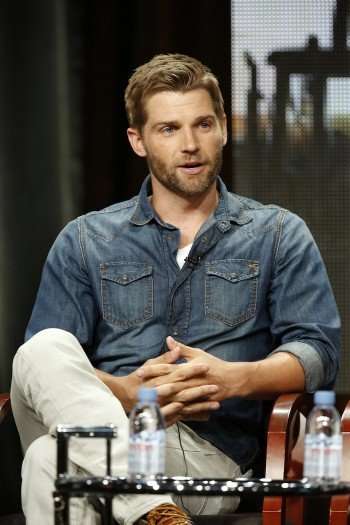 Premiering December 14 on SyFy (8 pm et/pt), Childhood’s End centers on the invasion of Earth by an alien race called the Overlords. Offering humans a utopian society, the meeting starts off to a promising start but any kind of takeover has its drawbacks.

Based on Arthur C. Clarke’s seminal book, Childhood’s End questions a future that takes a look at the sacrifices humanity may endure if alien contact is achieved.

“This is the beauty of the show,” says Mike Vogel, who plays a human who has direct contact with the Overlords. “It asks these large questions. You think that you want this thing and in a bubble it sounds fantastic for ten minutes. And then you start to realize the implications of that and what it means. You would lose self-expression.”

Click on the media bar below to hear Mike Vogel talk about Childhood’s End and the profundity of Arthur C. Clarke’s epic storyline (Vogel also mentions series writer Matthew Graham in the clip).

For an interview with Daisy Betts as she talks about her penchant for playing strong female characters, check out Deepest Dream.

‘New Amsterdam’ Crew Made It Through COVID...