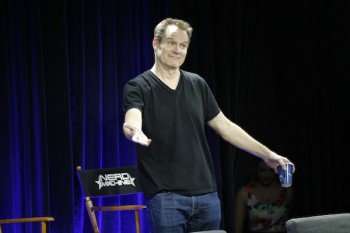 Although it started off with a bang during its first season, Heroes sustained its share of creative ebbs and flows. The good news, however, is that the series featured a slew of memorable characters, and during the last day of San Diego Comic Con fans were treated to the Heroes Reborn trailer.

The narrative thread of heroes being hunted hasn’t changed and from the looks of the trailer the world is still in constant disarray, and even though this series is having a 13 episode run, Heroes Reborn continues to possess the epic sprawl of of the original series.

Although several newbies are featured in the trailer, the show stopping moments came from the brief reintroductions of Heroes standbys Hiro Nakamura (Masi Oka), Matt Parkman (Greg Grunberg), Mohinder Suresh (Sendhil Ramamurthy, the Haitian (Jimmy Jean-Louis) and the ever ready Noah Bennet (Jack Coleman). Sunday’s Heroes Reborn Nerd HQ Secret Panel was attended by Coleman, and Oka also made a surprise appearance at the event (Hiro is arguably the show’s most beloved character).

Heroes Reborn debuts September 24 on NBC. Check out the trailer below and tell us what you think!