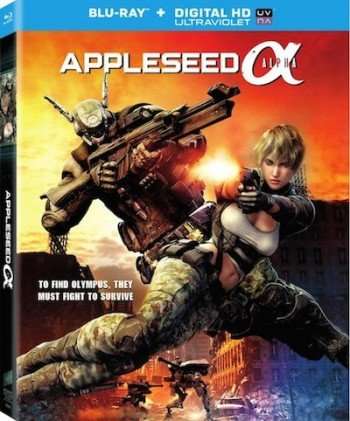 Masamune Shirow (Ghost in the Shell) is blessed with a fertile (if not dark) imagination, and the new Blu-ray release Appleseed: Alpha (Sony Pictures Home Entertainment, 93 minutes) delves into the origins of his Appleseed universe.

Deunan (Luci Christian) and her bad ass cyborg sidekick Briareos (David Matranga) are barely subsisting in a post apocalyptic New York, and it’s their quixotic quest for the city of Olympus that keeps their dreams alive. After saving the lives of Iris and Olson (voiced by Bina Palencia and Adam Gibbs), two strangers they meet on the road, their chance for a new chapter begins. Olson and Iris may be actual denizens of Olympus, and our protagonists sacrifice their own well-being in hopes of a better day.

“That’s one of the things I love about the film,” said Palencia, who also starred in the CW series Star-Crossed. “Do you fight for what you want the world to be or do you let the world do its own thing and you do your own thing? I think what you come to realize that in order for the world to be livable and to be this wonderful place that we all want it to be, we all have to work towards that. Gandhi said ‘be the change you want to be in the world.’ I think that’s a big theme for the whole film.”

Appleseed: Alpha is blessed with beautiful visions as well as a gripping story. Thanks to the extensive motion and facial capture work on the project, the animation is a perfect balance of realism and science fiction-esque fantasy. Special features on the disc includes an in-depth, 52-minute featurette on the making of Appleseed: Alpha as well as filmmakers’ commentary.


To check out or full Q&A with Brina Palencia, please go to our sister site Deepest Dream.