When Schwarzenegger & Stallone Get Together, You Can ‘Plan’ on Sparks Flying 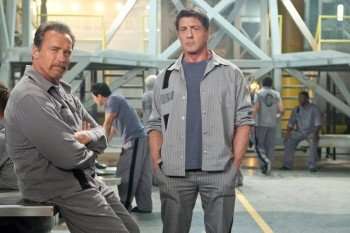 Once upon a time, Arnold Schwarzenegger and Sylvester Stallone were the muscle-bound kings of the action movie genre, headlining hits like Rambo, Rocky, Predator, and The Terminator. Their comparable proportions and competing franchises fostered a friendly rivalry between the two, eventually culminating in a business partnership when they and fellow action icon Bruce Willis opened the museum-restaurant chain Planet Hollywood in 1991.

But it wasn’t until 2010, when Schwarzenegger made cameo in Stallone’s manly action revival The Expendables, that we got to glimpse the two titans sharing the silver screen.  He would next be seen taking a holiday from his political day job to film an expanded role in 2012’s The Expendables 2, and now that the curtain has lowered on Arnie’s greatest acting feat of all — playing the Governor of California for eight years! — the stage is set for the gnarliest, most eagerly anticipated cinematic showdown since Pacino and DeNiro sat down for a cup of coffee in Heat!

Bring the pain, Arnie!! (Click on the media bar below to hear Arnold Schwarzenegger)

“Isn’t that sweet? But lest ye worry it’s all hearts and snuggles for the two beat-em-up icons, rest assured — the old rivalry ain’t dead. (Click on the media bar below to hear Arnold Schwarzenegger)

You can watch all those injuries as works-in-progress when Escape Plan is now playing in theaters.