Donald Trump Was Picky About Picking All-Stars for ‘Celebrity Apprentice’ 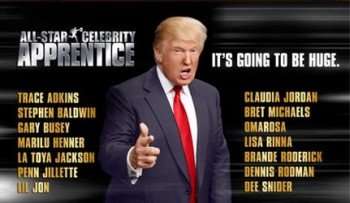 Celebrity Apprentice returns for another season when it premieres this Sunday 9/8 central on NBC. Donald Trump has made this season an All-Star Celebrity Apprentice. He brings in some of the celebrities that he likes the most, including La Toya Jackson, country star Trace Adkins, and many more.

Trump thinks it’s going to be an amazing season, and even had to turn down other celebrities who wanted to return.