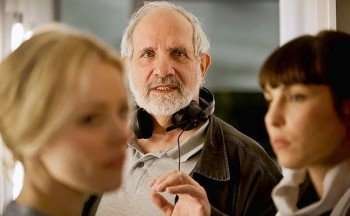 Al Pacino was originally slated to star in Snake Eyes (that role went to Gary Sinise), and it would have served as a reunion with Brian De Palma, the director behind two of Pacino’s most popular films (Scarface and Carlito’s Way).  Their electric pairing will hopefully come to fruition once again with Happy Valley, a biopic of late Penn State coach Joe Paterno.  Dave McKenna, the writer behind American History X, is close to a deal to pen a screen adaptation of Joe Posnanski’s book Paterno.

De Palma, who directed Noomi Rapace and Rachel McAdams in the yet to be released thriller Passion, is an uncompromising director known for his baroque yet highly arresting visual flair.  Unfortunately lumped for years as an Alfred Hitchcock copycat, Mr. De Palma has carried a lifelong fascination with the beguiling and complex nature of identity.  Whether it’s exploring the psychological and dreamlike terrain mined in Sisters, Raising Cain, and Femme Fatale, or delving into one’s moral compass (Casualties of War, The Untouchables, Snake Eyes), the filmmaker should be able to turn Happy Valley into more than just a bland, studio driven biopic.

I’m also looking forward to the stylized vision De Palma will bring to Happy Valley, and I recently pulled an old interview I did with him for Femme Fatale to reminisce on the rather frank (and abrupt) chat he had with journalists. During the interview, he talked about why he’s always prepared when he arrives on set.

“Absolutely I know what I’m going to do before I get there,” said De Palma.  “I haunt those locations, I photograph them.  I make digital  and architectural models and (use) computer programs.  I’m obsessed with locations and staging things at them and I’m greatly bored with most of the movies I see because it looks like nobody’s even thought about it for two seconds.”

Also from the Femme Fatale interview, De Palma talks about why answering all the questions posed in a screenplay isn’t the right way to go if one puts any importance on visual design:

Kate Mulgrew’s Back On Board ‘Star Trek’ With ‘Prodigy’