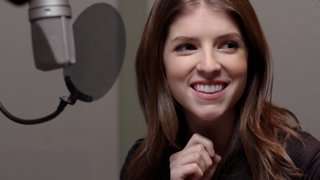 There will be time to talk on this site about Anna Kendrick’s upcoming feature, the animated supernatural/zombie feature Paranorman. The picture, which centers on a kid (Kodi Smit-McPhee) who can talk to dead people, features Kendrick voicing the role of the kid’s annoying sister.  It opens on August 17th. But for now, let’s focus on why Anna Kendrick is awesome.

For one, she gave an Oscar nominated performance in the 2009 film Up In The Air and she starred in last year’s affecting dramedy 50/50. But if having a beef frank enveloped by a bun is your idea of culinary heaven, Kendrick may have the answer.  All you need is a plane ticket to Chicago and a hungry stomach.

“So there’s this place (named) Hot Doug’s, which is like the Pink’s Hot Dog of Chicago, and they have a hot dog named after me,” says Kendrick, who was in the area shooting the independent film Drinking Buddies, which co-stars Olivia Wilde.  “And so I went in and got this hot dog.  It was really spicy!!  I needed a drink (afterwards).”

A journo briefly interrupted Kendrick and asked for its moniker.  “The hot dog? It’s called the Anna Kendrick.  And the other ones are like the Brigitte Bardot and the Joe Strummer, and all these other people.  But (it’s) awesome.  I love it.”

During the interview, Kendrick also explained why she was actually “gun shy” about choosing new material after Up In The Air’s success: [MEDIA=6385]

Glenn Close Got No Bad Reaction From...