AUDIO FILES/CONTENT
May 10, 2012
By Hollywood Outbreak 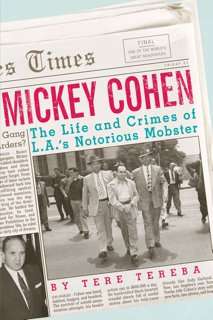 I usually drive around Hancock Park and Koreatown in a caffeinated daze, with 1950s Chet Baker tunes swimming in my head as I envision a Los Angeles littered with fedoras, hopped up jazz, and the smell of blood money.  This week’s debut of Gangster Squad trailer only heightens my fever dream, thanks to Sean Penn’s scenery chewing display as crime lord Mickey Cohen.

My L.A. noir fix has been briefly sated with the release of Mickey Cohen: The Life and Crimes of L.A.’s Notorious Mobster, writer Tere Tereba’s absorbing and gritty account of Cohen’s rise from a tough as nails pugilist from East L.A. to a seemingly untouchable gangster (he survived 11 attempts on his life).

“(Cohen) was in the headlines all the time,” says Tereba, who talks about Cohen’s relationship with the media.  “And the stories he gave were the ones he wanted out there.  And they were the stories that covered up the conspiracies, because he was in business with law enforcement.  He was in business with politicians, and the stories they wanted out there needed to be collaborations, so I try to pierce through the conspiracies.  Before anything written about him was just the puff pieces as he wanted them printed.  History remains that way until this book.”

In the following audio clip, Tereba explains why Cohen, who died of stomach cancer complications in 1976, was a “cottage industry” for Los Angeles (Tereba’s dog is heard in the background for a split second): [MEDIA=6091]