Donald Sutherland Brings An Unctuous Gravitas To ‘The Hunger Games’ 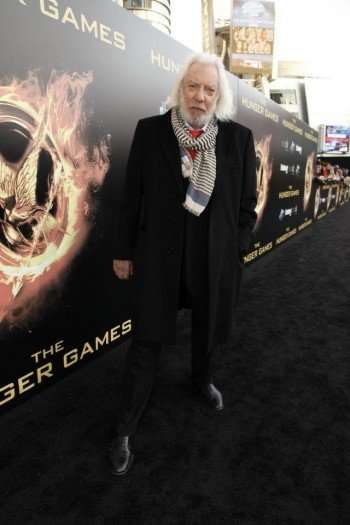 In theaters later this week, THE HUNGER GAMES is the much anticipated big-screen adaptation of SUZANNE COLLINS’ best selling young adult novel of the same name. An epic sci-fi adventure, the story is set in the not-too-distant future where children are forced by government decree to kill other children in an arena battle played out for the benefit of “reality” television.
As the delightfully corrupt President who rules over this dystopian society, DONALD SUTHERLAND is perfectly cast. Affecting an air of faux paternalism, SUTHERLAND oozes a serpent-like gavitas that jibes perfectly with the character COLLINS created in her text. We sat down with the actor a couple of weeks ago to talk about his performance and he admitted he’d not read the books until he was offered the job and credited director GARY ROSS for his performance. (CLICK ON THE MEDIA BAR FOR AUDIO)
Get the Flash Player to see the wordTube Media Player.
THE HUNGER GAMES opens in theaters Friday