The Boys Of ‘The Hunger Games’ Bring Romance To The Arena 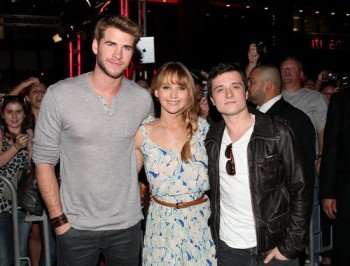 As if fighting to the death in front of a huge, blood-thirsty television audience isn’t enough, Katniss Everdeen (the reluctant heroine of SUZANNE COLLINS’ best-selling novel THE HUNGER GAMES, played here by JENNIFER LAWRENCE) must also deal with affairs of the heart as she’s torn between the adorable Peeta Mellark (JOSH HUTCHERSON) and the darkly handsome Gale Hawthorne (LIAM HEMSWORTH). Stepping into the shoes of some of the most popular and iconic characters in modern young-adult literature can’t be easy but these three actors make it seem so. During our recent interview, HUTCHERSON and HEMSWORTH had nothing but praise for the work of LAWRENCE. (*CLICK ON THE MEDIA BAR FOR AUDIO)
Get the Flash Player to see the wordTube Media Player.
THE HUNGER GAMES opens in theaters 3/23