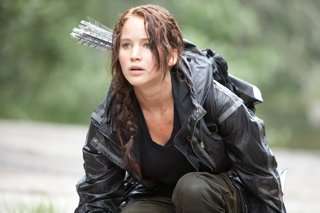 The Hunger Games opens March 23rd, and unfortunately I was not invited to last weekend’s press junket, as the powers that be claimed there was limited space at the tables.

No worries or complaints from this end, especially since Oscar winning screenwriter Simon Beaufoy (Slumdog Millionaire, 127 Hours, The Full Monty) was on hand to promote his latest film, Salmon Fishing in the Yemen. Starring Emily Blunt and Ewan McGregor, the film opens in limited release Friday.

During today’s Salmon Fishing in the Yemen interviews, Beaufoy talked about writing the screenplay to Catching Fire, the follow up to The Hunger Games..

Beaufoy wrote the screenplay to the Emily Blunt/Ewan McGregor drama Salmon Fishing in the Yemen (opening in limited Friday), and the following interview is taken from the Salmon’s press day.

“It’s very, very different from the way I normally adapt which is to read the book twice and then put it to one side,” says Beaufoy, who has already submitted his first draft for Catching Fire.  “You can’t do this (with Catching Fire) because you’ll get firebombed by the fan base.  I never see changing a novel a lot into a screenplay is disrespect at all really to the novel or the novelist.  I see it as the opposite.  You are making something different.  And to do that you have to be quite free with the material.  I had many concerns with taking on Catching Fire because my usual approach is to be very free.  But what I hadn’t realized was that Suzanne Collins used to be a TV writer and film writer. She sort of adapted it already. The novels are very filmic structurally already.  Luckily I haven’t had that battle in my head where I thought I had to discard everything, which is good because the fan base is incredibly loyal to everything.”

Beaufoy explains why he describes The Hunger Games trilogy as “bold” storytelling:[MEDIA=5868]

Hugh Bonneville: Why Downton Abbey Is A...

Back To ‘Jurassic,’ Sam Neill Promises A...

As A Director, Sam Raimi Had His...