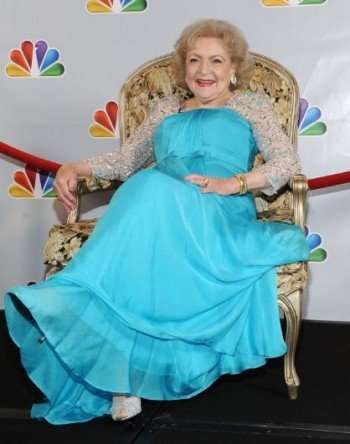 Still going strong as one of the stars of the hit TV Land sitcom HOT IN CLEVELAND and soon to be heard as the voice of “Grandma” in the big screen adaptation of the DR. SEUSS classic THE LORAX, nonagenarian actress BETTY WHITE is as popular today as she was when she first conquered television as the star of LIFE WITH ELIZABETH in the early 1950s.
Recently feted with a prime-time special commemorating the occasion of her 90th birthday, WHITE was celebrated by past and present co-stars as well as getting a congratulatory video by PRESIDENT BARACK OBAMA.
Sitting down with entertainment reporters a couple of days ago, WHITE confessed that the greeting from OBAMA came completely as a surprise and still makes her smile. (CLICK ON THE MEDIA BAR FOR AUDIO)
[MEDIA=5770]
HOT IN CLEVELAND airs Wednesdays on TV Land
THE LORAX opens in theaters 3/2
Share
Facebook
Twitter
ReddIt
Tumblr
Pinterest
Linkedin
Mix
Email
Print

‘Pennyworth’ Season 3 Premiering In October On...

‘Legacy: The True Story of the LA Lakers’ Premiering August 15 On Hulu